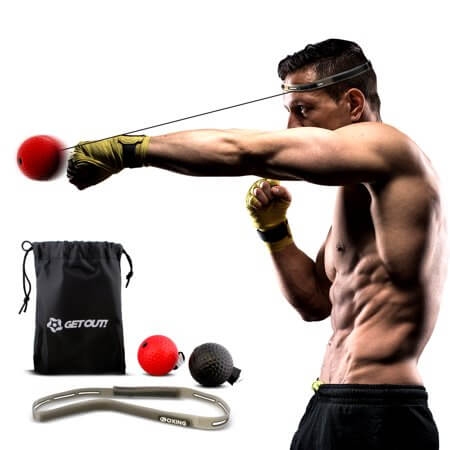 F​eel not enough efficiency and speed of reaction during workouts? React reflex ball for boxing is made especially for those involved in Boxing, Kick-boxing and people involved in sports.

Use the simulator is necessary for combination with other exercises, then there will be real benefits.

The boxing reaction balls simulator is very easy to use and store due to the fact that it takes up very little space. It is amazing because of his property that both professionals and beginners are actively and with pleasure working with him.

Whatever martial art is involved in – it will always provide invaluable service and assistance in training reaction and developing coordination. And if the choice falls on an impact sport, such as boxing or kickboxing, it will help train the speed and accuracy of the strike.

The principle of work with the simulator

In order to adapt to the simulator, it is necessary to hit the balls lightly. The ball, bouncing off the impact, will stretch the gum and go in the opposite direction, towards the striker.

Start to beat not strongly, in order to have time to react to the returning ball, which will fly to your face. And it is better to carry out the blow, aiming at the center of the ball and directing it down, so that it would fly back a little above the face.

When the ball comes back, your task is to hit it again. Thus, we get used to the simulator, working with him for ten-fifteen minutes a day.

After you have adapted a little to the fight ball simulator:

Increase the force of the blow and hit the ball straight, you can alternately beat with one hand and the other, draw your own combinations. You can try to beat and side punches. Work with the simulator for up to twenty minutes a day.

It is time to learn, between the blows:

Return the hands to the chin, occupying a protective stance: the fists protect the head, the elbows – the torso. So, your task at this stage is to work according to the scheme: strike – defense – strike. We reach this exercise to perfection. You are doing well.

Now we learn to move. During the blows we move around the room, performing jumps in the rack, while not forgetting to return hands to defense.

Advantages of the boxing reflex balls

How to improve reflexes for fighting?

In order to train your fighting reflexes and speed, you need to develop your skills regularly. Experienced athletes improve their reflex speed working every training on exercises enhancing the boxing reaction.

1. The development of reaction speed during an attack

The best for developing the reaction speed are exercises in freestyle combat. Operating in it with various blows and defense techniques, the boxer selects and creates favorable moments for the attack.

At the same time, he must have time to choose the attack method and strike quickly and accurately. Until the position of the enemy’s body has changed. Gloved partner exercises are the best of all exercises.

2. The development of reaction speed during the defense

All the boxer’s defencing actions depend on his reflex speed. The success of defense depends on the boxer’s ability to foresee the type of upcoming attack, the beginning and direction of the counterpart. And most importantly, react fast and on time.

The main way to develop the reaction speed is the practice with the partner in a restricted battle. These exercises can be one-sided and two-sided.

At the beginning of the exercise:

Tthe task of the boxer is promoted by a somewhat slower attack hit by the partner. In the final stage, the strike is applied suddenly and with maximum speed. The defender must have time to respond to the strike with one protective movement while maintaining its correct shape.

More difficult exercises that require boxer’s increased attention when he does not know which hand will the partner deliver the stroke with. The defender must have time to determine which hand will strike and choose a defense method.

During these exercises, the trainer determines only the type of each partner’s strike and ways to protect against it.

Now you are almost a pro and can afford to train the slopes of the returning ball, hit the ball on the wall and dodge it while working with the simulator, turn on the TV and, distracting on the screen, learn with side vision to respond to the flying ball.